Like all sports, whitewater rafting and kayaking has a language of its own, and it can take a while to pick up all the terms. While there are many terms to learn, this basic glossary of terminology will get beginning paddlers started.

Get to know some of the equipment white water kayakers use.

Back band: Located behind the seat, the back band helps the kayaker maintain an upright position in the kayak.

Booties: Specially-designed neoprene shoes worn by paddlers for comfort and security when walking in the water.

Drydeck: A one-piece cover that combines with a spray skirt to keep the paddler dry inside the boat.

Drysuit: A complete suit that seals out water, usually made of windbreaker material.

Dry bag: A waterproof bag designed to keep the contents dry while on the water.

Float bags: Inflatable bags that can be placed in the stern of the kayak for added buoyancy.

Grab loops: Loops located at the bow and stern that make it easier to carry and move the kayak, as well as serving as tie-off points for rescue ropes or tow lines.

Helmet: A safety helmet worn to protect the head.

Hip pads: Pads that are placed around the hips to keep the paddler secure in the seat.

Paddle: The double-ended paddle used to move the kayak.

PFD (personal flotation device): This piece of safety equipment keeps a paddler afloat in the water if the kayak capsizes or boaters fall out of the boat. Best know as a life Jacket.

Rescue vest/safety harness: A rescue vest and safety harness are used to assist with rescues from the water, allowing quick attachment and detachment from a kayak or other paddler as needed.

Spray skirt: A spray skirt covers the open part of the kayak to prevent water from gathering inside.

Thigh braces: Plastic braces inside the kayak to keep the paddler’s thighs in place.

Throw bag: This bag holds rope that is used as a tow line to rescue swimmers or kayaks.

Tow line: This rope can be used with a safety harness to assist swimmers or tow a kayak.

Wetsuit: A snug suit made of neoprene that provides insulation from cold water.

In the whitewater boaters will encounter a number of different features, each with its own name.

Boil: This water feature looks like boiling water, and it is caused by constricted water being forced back to the surface.

Chute: A narrow area of the water that leads to a drop.

Drop: A steep section of the water dropping in elevation.

Eddy/eddy line: This feature is formed when the water flows around an obstacle and is forced back upstream. An eddy line is the area where the two flows of water, with and against the current, meet and create unstable water.

Hole: Also called a hydraulic, this feature is formed when water drops over an obstacle and then comes back up towards the obstacle.

Horizon line: This refers to a point where the paddler can’t see the river ahead on approach to a drop.

Pillow: A water feature where water rises above the surface and sends water in multiple directions.

Seam: A spot in the water where two currents meet.

Slide: Water pouring over a rock in such a way that the kayak can slide down.

Strainer: This feature is created when a tree or branch forms an obstacle that water can flow through but can cause a kayak to become trapped.

Undercut rock: This dangerous feature is a rock that water can flow under.

Wave: There are a variety of wave types, all created by rocks, constrictions of the river, or any other debris that the water can flow over.

Boof: This is a move that is used to keep the paddler upright over things like rocks, waterfalls, or drops. It uses a vertical stroke.

Bow draw: This is a very efficient turning stroke.

Eskimo roll: This move rights a kayak that has turned into the water.

Loop: This is a front flip. There are several types of loops.

Spin: A trick that involves spinning the kayak 360 degrees.

Surfing: This means riding a wave; there may be different or additional terms, depending on the type of wave or the direction of travel. 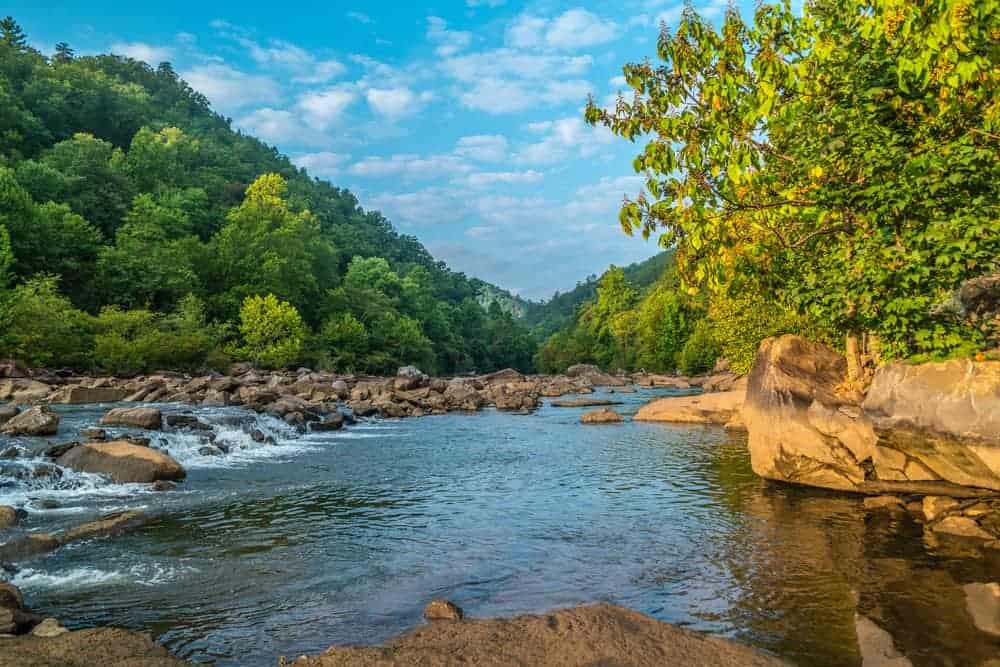